This is the section for all general discussions.
Post Reply
231 posts

The Bush-associated Hallliburton and Carlyle Group are relatively well-known by "conspiracy theorists", while the similarly operating largest construction company in the USA Bechtel Corporation (and the Bechtel family) is relatively unknown.
Bechtel's projects include petroleum and chemical plants, nuclear weapons facilities, oil pipelines, mining and metal projects, and water management.

Firestarter wrote:I doubt Catherine Austin Fitts, who has been a little too close to the center of power, but doesn't disclose enough of the scandals she was involved in, to be credible.
In one of those strange coincidences, Austin Fitts also worked for Dillon Read & Co. Inc. that was acquired by Bechtel in 1981, through its private venture arm Sequoia Capital.

It totally woke up almost everybody and blew up in their face spectacularly and the big Democrat Party PR firm that now admits they ran the whole show is running around like a chicken with their head cut off saying, ‘Well, we didn’t really want $2.75 trillion.’ But they did ask for it.

.
I don't understand why Alex Jones is still selling his merchandise and pushing his Gofundme campaigns as he and Infowars will inevitably go bankrupt: https://www.infowars.com/posts/alex-jon ... rt-ruling/
The Order of the Garter rules the world: https://www.lawfulpath.com/forum/viewto ... 5549#p5549
Top

This certainly won't harm his popularity.

After being accused of Holocaust denying and anti-Semitism (with the alien reptilians supposedly a codeword for Jews), David Icke won't be allowed to give a speech in the Kingdom of the Netherlands, home of corruption and censorship (even worse than the UK?).

Another horrible conspiracy theorist, Richard D. Hall, is being sued in the UK for defamation and harassment by supposed victims and survivors of the 22 May 2017 Manchester Arena bombing, including Martin Hibbert.

Hall has argued that the "Manchester Arena bombing" was staged without any real bomb, and that the victims either died previously or are still alive and given a false identity.
Hall has tracked down survivors, including Mrs Bridgett and Eve and father Martin Hibbert, and filmed them, arguing that they were lying about their injuries.

Hall is certainly not the only one to think that nobody died at the "Manchester Arena bombing". A BBC poll of 4,000 people found that 1 in 5 didn’t believe the stories of the supposed victims, while 1 in 7 doubted that any (real) bomb went off and that the "victims" involved were really "crisis actors" pretending to be injured.
So while I thought my (and Hall's) opinions on the "Manchester Arena bombing" were very rare indeed, it's shared by 1 in 7 of Britons...

Hall has also denied the official tales on 9/11, the murder of Jill Dando, the disappearance of Madeleine McCann, and the ‘alleged’ murder of MP Jo Cox: https://www.dailymail.co.uk/news/articl ... mbing.html
The Order of the Garter rules the world: https://www.lawfulpath.com/forum/viewto ... 5549#p5549
Top

The Dutch government has succeeded in starting a media hysteria about David Icke being banned from the Netherlands and the other "Schengen countries" in the EU.
If I could figure this out, the autorities could, couldn't they?

They don't boast that Icke's son, Gareth Icke, who is also in the "conspiracy" business, does have an active Twitter account: https://twitter.com/garethicke
The Order of the Garter rules the world: https://www.lawfulpath.com/forum/viewto ... 5549#p5549
Top

There are some of these Dutch "republican" activists that argue that a king with dictatorial powers, isn't exactly democratic. For some reason these dictatorial powers are mostly ignored by the alternative BS media...
Like you could expect in a royal dictatorship, it is actually a criminal offence to speak the truth about the Dutch royal degenerates in the Kingdom of the Netherlands.


Erwin Lensink amongst others calls our greatly beloved Royal Family “bastards”, and has “evidence” (or at least strong arguments) to support that claim.
Lensink calls this treason. Lensink also calls our Royal family despots and the Dutch Monarchy a “dictatorship”.

In May 2014, Lensink found out that the claws of the Dutch Royal family reach into Germany. He was arrested in Münster, when he was standing with a protest sign waiting for King Willem-Alexander and Queen Maxima
Lensink’s sign refers to the (Dutch royals connected Nazi) Rost van Tonningen, German boy Manuel Schadwald (who was sexually abused and murdered in the Netherlands) and the Joris Demmink “affair” (the cover-up to hide the ritual child abuse by the Dutch elite, including Royal family). Erwin Lensink has an interesting “conspiracy” site that’s blatantly blocked by Google, Yahoo and their ilk; most of it in Dutch though: http://erwinlensinkvrij.nl/english


In May 2015, an Arab Muslim was charged with insulting our King for a fine of 500 Euro, because on 16 November 2014 he had said “Fuck the King” (Fuck de Koning).
Then something strange happened... “Fuck the King” became a popular expression amongst the Dutch public.
On 7 May 2015, “Fuck the King” was sprayed on the stolen Amsterdam “Palace” on the Dam (stolen by the Dutch Royal family, who promised to give it back...). On 30 April 2013, at the coronation of King Willem-Alexander at the Dam in Amsterdam, 2 protesting Republicans were locked up (taken hostage) for 2 hours – Joanna van der Hoek and Hans Maessen. Joanna, had earlier been detained in Utrecht when (then) Queen Beatrix visited, and she held up a sign with: “It is 2013” (insulting?!?).

Joanna held up a sign with the text “I am not a subject”, at the Dam in Amsterdam (how is this an insult?!?). 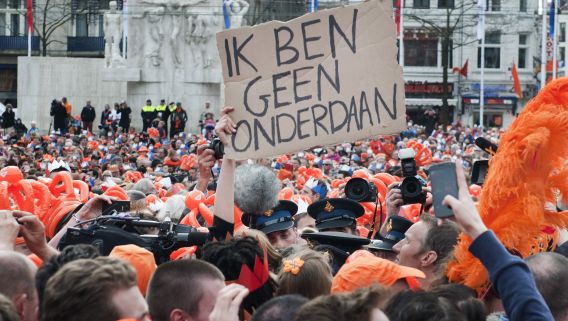 If There's a BUSTLE ( Synonym for Commotion = Definition of Commotion 1 : a condition of civil unrest or insurrection) in Your Hedge-Row (Living Fence)
Don't Be Alarmed Now...
It's Just a SPRING-CLEAN for the May Queen

Yes, there are Two Paths you can Go By, but in the Long Run
There's Still Time to Change the Road you're On'

He Screwed up on a Couple of the Lyrics but the Gist is the Same...

Nice Little Harvest by the DEIC Nest of Vipers

On 30 April 2009, the Dutch national holiday Koninginnedag (Queen's Day), a man drove his car at high speed into a parade which included Queen Beatrix and other members of the Royal family.[10]

The driver hit members of the public lining the street leaving twenty-two injured and eight dead, including the driver himself, who died the following day.
Although the Royal family was unharmed, it is believed to be the first attack on the Dutch royal family in modern times.

[Verse 1]
There's a lady who's sure all that glitters is gold
And she's buying a stairway to Heaven
When she gets there she knows, if the stores are all closed
With a word she can get what she came for
Ooh, ooh, and she's buying a stairway to Heaven
There's a sign on the wall, but she wants to be sure
'Cause you know sometimes words have two meanings
In a tree by the brook, there's a songbird who sings
Sometimes all of our thoughts are misgiven
[Chorus]
Ooh, it makes me wonder
Ooh, makes me wonder

[Verse 4]
If there's a Bustle in your Hedgerow, Don't be Alarmed now
It's just a Spring Clean for the May Queen

Yes, there are two paths you can go by, but in the long run
There's still time to change the road you're on

And it makes me wonder
Ohh, woah

[Verse 5]
Your head is Humming, and it Won't Go, in case you don't know
The Piper's Calling You to Join him

Dear lady, can you hear the wind blow? And did you know
Your stairway lies on the whispering wind?

The Tune will Come to you at Last
When All are One, and One is All

To be a Rock and not to Roll

[Outro]
And she's buying a stairway to Heaven 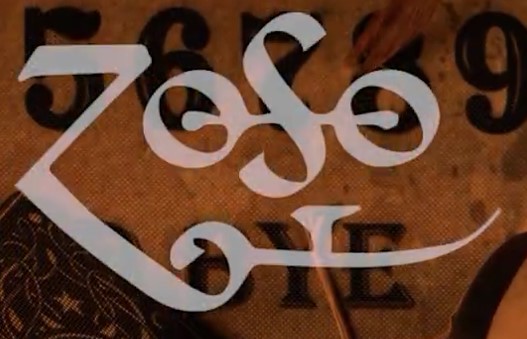 Hairway to Steaven.. just popped into my sick mind.
there's a bustle in my muscle as I hussle with the thistles.
there is only one way to go with the weeds. take no prisoners.

With the help of both the mainstream and alternative media, recently the following misleading chart was pushed into the spotlight by lying congresswoman Katie Porter, blaming corporate "Wall Street" greed for the high inflation. She even praises Joe Biden, while the inflation this year has been largely caused by the sanctions against Russia.
Porter claims that corporate profits account for 53.9% of the recent rise in inflation, versus an average 11.4% for from 1979 to 2019. In contrast the share of labour costs went from 61.8% to 7.9% (second quarter 2020 to the end of 2021). It's strange that Porter doesn't take into account the handing out cheap newly created trillions cash (the BlackRock "going direct" plan), or the green energy technocracy that has been inflating energy prices (which causes leads to inflation, including of food prices): viewtopic.php?t=985

The chart does show that most of the plandemic trillions have gone to the rich shareholders of companies, instead of wages for the lower and middle classes, which is also a sign of technocracy being implemented, with computers making man obsolete. Let me start this post by saying that I like the Expose as one of the few media that report on the difference in death and disease in the COVID vaxxed and unvaxxed.
Although recently they seem to recycle more material than new information.

It really frustrates me that when I visit the site I get an endless amount of pop-ups, not only annoying but also misleading (not to say dishonest).

The following seems to be the most common, "only xx days to save the Expose"...
See the following pop-up from 29 October that shows that they already received 100% of the funds for October + 75% funded for November.
But instead they report that only "93%" is funded for this October month, be quick to "save the Expose". 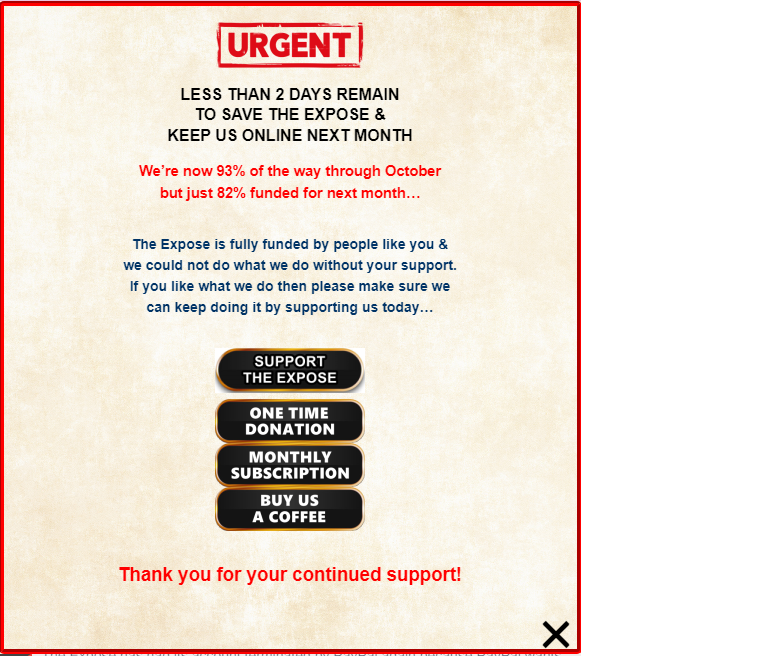 .
Then it gets worse.
In order to scare its viewers into donating, on 4 November there were suddenly once again 2 days to save the Expose", with only "60%" funded (that's lower than what they already reported on 29 October). 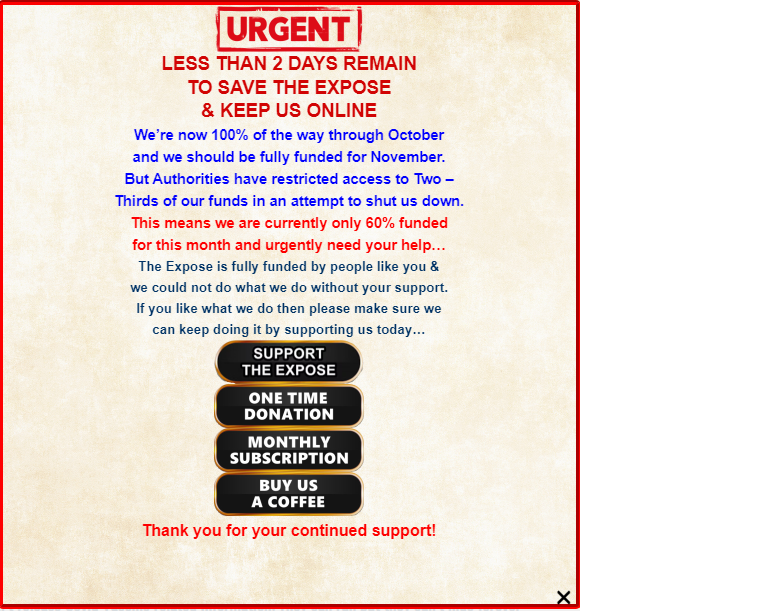 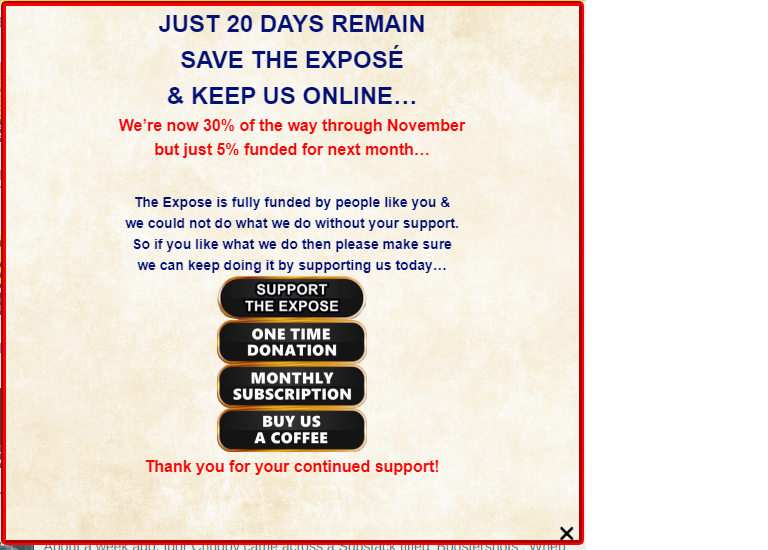 .
So obviously the Expose are lying about the amount that they're funded, trying to get more, which also ruins their credibility in general...
The Order of the Garter rules the world: https://www.lawfulpath.com/forum/viewto ... 5549#p5549
Top
Post Reply
231 posts