This is the section for all general discussions.
Post Reply
231 posts

Firestarter wrote: ↑Wed Oct 12, 2022 8:57 pmA jury has decided that InfoWars' Alex Jones has to pay $965 million in damages to 8 families of supposed victims of the 2012 Sandy Hook Elementary shooting

It weren't only the families, but even an FBI agent and first responder, William Aldenberg, got awarded a cool $90 million.

But these are only the "compensatory damages" (how in hell could the compensation be so high?), the plaintiffs will (probably) also be awarded "punitive damages" (even higher?!).
Attorney for Sandy Hook families Chris Mattei explains that Alex won't be off the hook by filing for bankruptcy, "the verdict was for intentional misconduct, the type of conduct that is not dischargeable in bankruptcy. So he’s gonna be on the hook for this for a very, very long time”: https://www.yahoo.com/entertainment/att ... 48575.html


Alex Jones ridicules the $965 million in damages he has to pay. He has a point there, that it is so high that he simply cannot pay, "why not $2 billion?"!
It looks to me (again) that the role Jones plays, is to convince his gullible fans that patriots don't defend themselves in a court of law (and even post videos to sabotage their defence).

don;t attack the British, they will sue us for all we are worth.../ George Washington / NOT!
Top

Firestarter wrote: ↑Sun Sep 04, 2022 6:44 amThe most interesting I found on Wikispooks was the information on the Project Babylon "supergun" that Gerard Bull (who was assassinated by British Intelligence) was building for Saddam Hussein's Iraq.

This "supergun" was not a weapon, but to put satellites into orbit. Maybe they were afraid that Saddam would evade the surveillance state or would expose the Apollo moon landing hoax?
Investigative reporter Jonathan Moyle was also murdered (suicided) 9 days after Bull

.
James Corbett looks into some of the alternative encyclopedias (alternatives to Wikipedia).
He promotes Wikispooks, but why does Corbett never dives as deep into conspiracies as Wikispooks?
https://www.corbettreport.com/solutions ... ikispooks/
Last edited by Firestarter on Sat Oct 15, 2022 6:45 am, edited 2 times in total.
The Order of the Garter rules the world: https://www.lawfulpath.com/forum/viewto ... 5549#p5549
Top

The following reminded be of what I posted about before, see the quotes at the end of this post...

ThinkingSlow found out that Twitter traffic is manipulated by BOTs.
The Twitter posts by Members of Parliament Zarah Sultana, Chris Bryant, Richard Burgon and Ed Davey are artificially amplified by BOTs, with the result that thay get some 5,000 likes per tweet!

That is 180x higher than other comparable MPs (in adjacent constituencies).
Even well-known UK journalists and academics don't receive more than 400 likes per tweet (on average): https://expose-news.com/2022/10/09/3000 ... eat-reset/

Firestarter wrote: ↑Mon Aug 22, 2022 8:32 pmIn a briefing on DemCast’s “The Digital Front”, the tactics are detailed. It explains that “sometimes it’s best to ambush social media platforms with mass messaging, all at once”. Firestarter wrote: ↑Fri Sep 09, 2022 6:37 amThe 77th Brigade uses social media such as Twitter and Facebook as well as psyop techniques to influence populations and change behaviour. David Miller said that it is "is involved in manipulation of the media including using fake online profiles".

Firestarter wrote: ↑Mon Jul 25, 2022 8:41 pmLegatum was heavily involved in staging Brexit.
The Maltese journalist Daphne Caruana Galizia was assassinated in 2018, probably because she came a little too close to exposing the links between Cambridge Analytica, Henley and Partners and the Legatum Institute.

.
I've previously posted about the 16 October 2017 murder of the Maltese journalist Daphne Caruana Galizia, for exposing some real scandals in the world of passport buying, corruption and rigging elections.

Interestingly somebody got convicted for ordering the hit, Maltese gangster businessman Yorgen Fenech, whose business empire includes casinos, reportedly for 150,000 euros ($175,540).
Fenech headed a consortium which was awarded a government contract for a power station. Caruana Galizia was investigating the corruption in awarding this contract when she was murdered.

Not only former PM Joseph Muscat was close to Fenech, who was forced to resign in January 2020 after protests on the streets in Malta, but also his chief of staff Keith Schembri, and former energy minister Konrad Mizzi.
Schembri and Mizzi were linked to 17 Black, a "secret company" owned by Fenech. In March 2021, Schembri was charged with money laundering and fraud.

One suspect in Caruana Galizia’s murder, the "middleman" Melvin Theuma confessed in return for a pardon.
Vince Muscat (no relation to Joseph), pled guilty and was sentenced to 15 years in jail.
The brothers George and Alfred Degiorgio were recently sentenced to 40 years in prison.

In February 2019, Joseph Muscat invited Fenech to his birthday party at Girgenti, where according to Yorgen Fenech discussed the Caruana Galizia murder, which was denied by Muscat.
They also had repeated phone conversations and sent each other text messages.


I'm disgusted that none of these so-called journalists (including Daphne Caruana Galizia's cowardly sons!) expose the more interesting links.
This is what I wrote earlier... 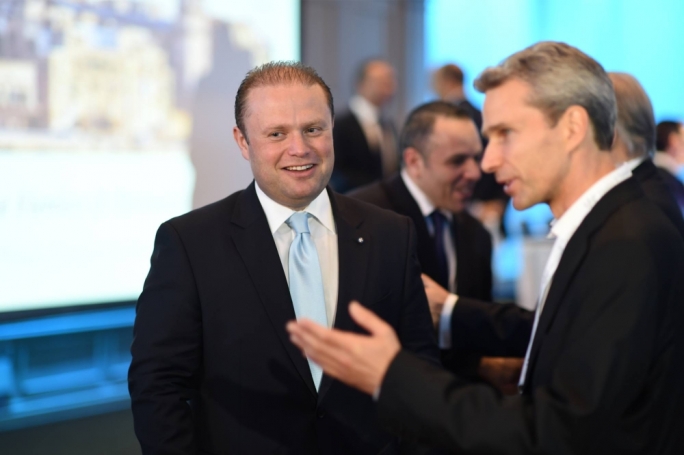 Daphne Caruana Galizia was repeatedly harassed with defamation law suits to remove this information from her blogspot.

Galizia was sued for defamation in London by the notorious law firm Mishcon de Reya for Henley and Partners. She had evidence that Christian Kalin had discussed this ploy with PM of Malta Joseph Muscat and his chief of staff Keith Schembri (see the mail). About 10 years ago chairman of Henley and Partners, Christian Kalin, struck up a relationship with former CEO of Cambridge Analytica, Alexander Nix.

In February 2016, Caruana Galizia started exposing that Konrad Mizzi and Keith Schembri, Muscat's closest lieutenants, had set up unnamed Panama companies linked to New Zealand trusts.
A March 2014 profit-sharing agreement under which Willerby, owned by Brian Tonna, was given half the profits Nexia BT earned from passport sales.
The FIAU discovered that 3 Russians, who applied for citizenship through Nexia BT, paid €166,832 directly into Willerby Trade's Pilatus account. Then Willerby paid a €100,000 kickback to the Pilatus account of Maltese Prime Minister's chief of staff, Keith Schembri.
A fourth FIAU report shows links between Mizzi and Schembri's Panama companies and 17 Black and Macbridge in Dubai – which Caruana Galizia was investigating in April 2016.

In early 2015, Malta signed a controversial $1 billion gas supply contract with Azerbaijan. The FIAU traced $1.6 million into 17 Black's Noor Islamic Bank in Dubai from a Latvian bank. The payment came from a company in the Seychelles owned by an Azerbaijan national.
https://www.lawfulpath.com/forum/viewto ... 652#p80652
The Order of the Garter rules the world: https://www.lawfulpath.com/forum/viewto ... 5549#p5549
Top

Firestarter wrote: ↑Tue Jul 26, 2022 6:45 pmI could not understand either why Bannon would defy (court) orders, with the logical result that he has now been found guilty of 2 counts of contempt of Congress (with a minimum of 2 times 30-day sentence).

Steve Bannon has been sentenced to 4 months in prison and a $6,500 fine for defying a subpoena.
Bannon will remain free, until the appeal procedure is finished. Bannon will try to defend himself by former president Trump "orders" to not testify, and being advised against testifying by his attorney.

Stealing milllions from the "nonprofit" We Build the Wall are serious charges though, this could lead to 15 years in prison and a hefty fine:
https://www.usatoday.com/story/news/pol ... 551244002/
.

Firestarter wrote: ↑Thu Sep 08, 2022 6:48 pmSee Donald Trump Jr. praising the “We Build The Wall” scam in July 2019 with its leader Brian Kolfage (an Iraq war veteran, who lost both legs and his right arm). 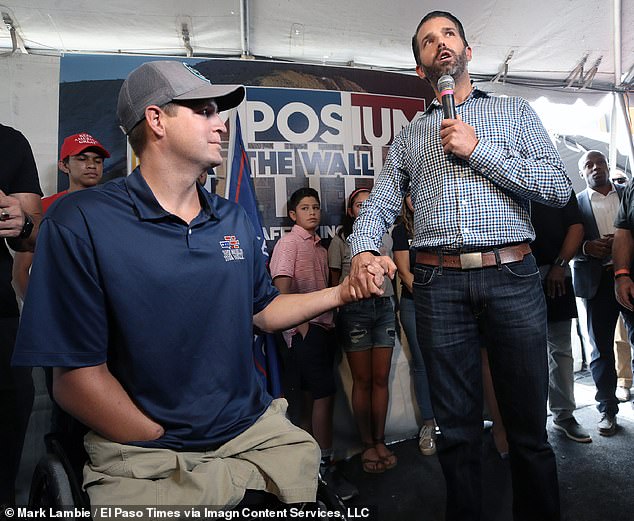 Just Seeing Photos of these Suited up Parasites

Triggers my Solar Plexus and Vagus Nerve into Dis-Gust!

Contempt of court... hah I need a new dictionary if not language to express my self and to describe this reality...I fart in your general direction /monty pythons holy grail frog throwing contest scene
not the Urban Dictionary, but a rural one.
dudes look like sanitised plasticised Thunderbirds manequins (sorry real man's out there)
I just want to rip their orchestrated heads off.
Top

Many of the best-known conspiracy theorists sell merchandise. I haven't verified but I haven't heard of any of them actually selling faraday cages for cell phones.
Does this once again prove that they are "controlled opposition"?

There used to be a time that you could take the battery out of the mobile phones, for some reason, they made things "better" by eliminating that possibility.
I can remember reading about the US army having faraday cage tents to communicate in secrecy.

This should be a bestseller...
A 3 layer fabric - nickel- and copper-coated -— is sold ($26 per square meter) so you can make your DIY Faraday cage bag for phone. This metallic fabric could of course also be used to isolate other "smart" devices (e.g. laptop).
Silent Pocket also sells pre-made faraday bags for a smartphone: https://www.wired.com/story/silent-pock ... one-pouch/
The Order of the Garter rules the world: https://www.lawfulpath.com/forum/viewto ... 5549#p5549
Top

Yes FS.
The Cost of Copper - Mesh or Otherwise has Always been Expensive.
My Sister and I were Avid Hunters/Scroungers of Old Cabling and Shim to Strip for Art Projects, Wiring and Jewelry Making.
And the Paint is Exorbitant...

I Purchased a Box Lot of Space Blankets Back in the Day, When I Lived in 'Sardine City' and had Auto-Immune and RF Sensitivity.
Hoping to Shield from the WiFi Sea Around me.

I Didn't Exeriment Nearly Enough with the RF Meter and I Think It Helped to a Degree but then I Just Ended Up Ethernetting my Laptop Directly.

My Home is Like Something Out of Arabian Knights as it is.
If I Lined it in Gold Mylar then the White Coats would have a Field Day if they Ever Found me...

It Would Look Lovely Though...

Old Androids Only so that you can take the Battery out after use.
iPhone Prisons need to be 'Jail Broke'
I Bought a Tool Kit back when I Sttarted 'Fixing' Laptops and Phones.
All the 'Special' Screwdriver Heads and Torque Bullshit.

All Screaming "You Don't Own This Device OR have Permission to Access it!"
All the More Reason to Do It in my Errant Mind!

I Made a Faraday Cage out of an Old Microwave and Store my 'Alexandrian Library of Hard Drives in there.

Thing is with EMP's and Project Whatever's (Insert PSYOP Here)

Staged or Real Carrington Events, You Never Know the Hour...

I am At Serious Risk of Morphing Into a Permanent Cliche...