This is the section to discuss and share info, research and links relating to any alternative beliefs and theories.
Post Reply
15 posts

"We have such stones here in Australia too, of which our people refer to as the "Cheringa", which may be roughly translated into English as "Sacred Stones", only that the word "sacred" in this regard contains an incredible amount of emphasis and weight, being more so "infinitely and inconceivably sacred", or the like.
( Translation can be quite difficult indeed, at times, between Indigenous Australian Languages, and English, but never more so than when it comes to translating sacred and spiritual terms..)

There is the eternal connection to origins in the concept, or reality of "Tjukurrpa", and there are the prophecies related to "Alcheringa", or the new outpouring of the sacred Spirit of Life and Light, which is and will come to pass. In this process, the earth and all that lives and breathes thereupon, and every single living cell, will be transformed, and a new capacity to manifest the qualities of Life and Light will be generated within.

The prophecies regarding "Alcheringa" are known throughout the thousands of nations across the vast Australian continent: A Resurrection of Sacred Lore and the revival and renewal of the Spirit of the Spirit of Life and Light will be reflected in all hearts which are pure, and those which are to be purified.

This ancient and powerful process is taking place within this plane of existence right now, as any and all subsequent events lead to that which was, and is, and is to come.
In every Sacred Path upon the earth I have found the same Light, the same Spirit, the same Power, and all indicate, direct and prepare the people to the same unfolding Path.

I recognise the unity within our diversity, ever and always, and recognise that whatsover Name we will call it by, it is reflected bright and clear within the pure hearts of those who know.


The Mystery of Roerich's Expedition. Reflections on history


Thanks for these two videos, very interesting.

I wish I knew what power this stone holds, we can only surmise.
He sits enthroned above the circle of the earth, and its people are like grasshoppers. He stretches out the heavens like a canopy, and spreads them out like a tent to live in. Isaiah 40:22
Top


www.youtube.com/watch?v=AILCVu3nLNw
We Are More Than We Realise...

In the 1600's Athanasius Kircher a Jesuit scholar left a map of the under world out side the door of George Matthäus Seutter's map shop.

Athanasius Kircher also drew a map of Atlantis as he
decided to create a map of Atlantis. As his biographer John Edward Fletcher explains, the idea behind the map was to validate a (weird) larger theory about the Earth: 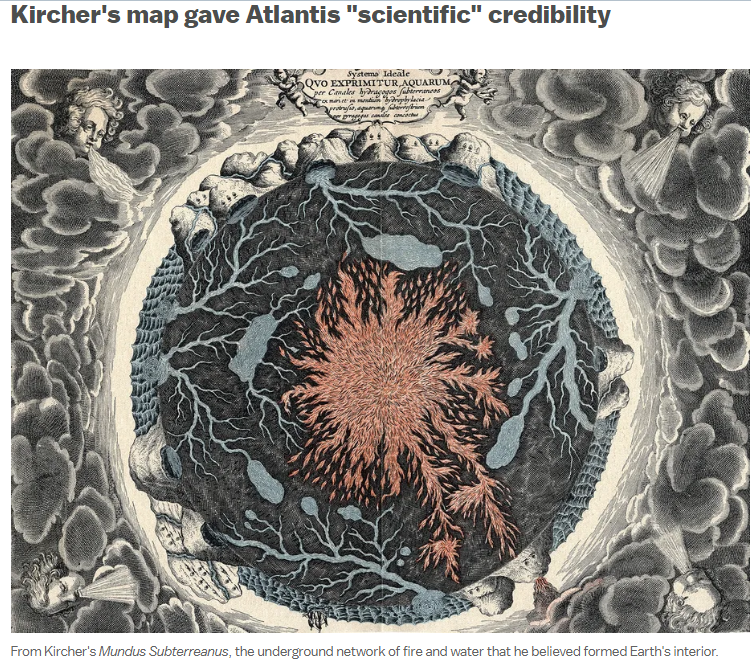 " Fletcher also wrote. "The sea, with its tides, flowed into the body of the Earth and out again, (the giant whirlpool at the north pole )

Be prepared to be amazed.

He sits enthroned above the circle of the earth, and its people are like grasshoppers. He stretches out the heavens like a canopy, and spreads them out like a tent to live in. Isaiah 40:22
Top

May 30, 2018
Breathtaking pictures show the world's largest cave in Vietnam which has its own climate and CLOUDS.

The spectacular Han Son Doong cave in Vietnam is so gigantic it could fit a 40-storey skyscraper within its walls.

With the eerie green glow inside the mystical, echoing cavern, Vietnam's Han Son Doong cave looks like it could be on the edge of the world.

The huge cave - large enough to fit a 40-storey skyscraper - is so massive that it has its own climate, and clouds even form inside it.

At more than 200m high, 150m wide and 5km long, the Hang Son Doong cave in Vietnam is so big it has its own river, jungle and climate.

"With ceilings towering over 200 metres high in places, the cave is a humbling and belittling experience," said John, who has lived in Thailand since 1977 and runs the Cave Lodge guesthouse

It's not a trip for the faint-hearted - it takes a half day trek through a stunning jungle peppered with butterflies and a journey through knee deep rivers to finally get to the entrance of the colossal cave.
Adventurous explorers must also pass through the third largest cave in the world, Hang Ev cave - used as a location for the Peter Pan movie.