Cryptocurrency and the Future

This section is dedicated to individual and social liberty, decentralization and developing healthier systems of community.
Post Reply
33 posts

You have no clue what you are talking about and good luck further. I am for years in this space and I now what I am talking off and you don't bc this is just dumb..


Dianthus declares that he may pay with BTC for solar panels (or for gold). I believe this is #Fake News, but let's be brain dead sheeple and accept this declaration for a moment. What will local solar panels distributor do with BTC? He will not use cryptocurrency in trade with China for sure. Who will accept BTC as payment? Employees? Power grid? Petrol station?
How much money do you want to spend on solar panels quoted in BTC? How much money want to send on gold? Don't you remember story of king Midas?

This is a FACT bro what I am saying and is not fake at all but REALITY and if you are so down bc you missed it all, do not go blame others yeah! You are the brain death bc you are whining with your own closed mined nonsense that are not the REAL FACTS and that is fact. Good luck bc you are the brain death sheeple here and I do not bother with those anymore bc has no point. Bye

(ps. you played here first on the person so you get your own ego back

For the wakes here and understand this moment, a lot can be bought with Bitcoin at this time. You can buy a Tesla with it (cost +2-3bitcoin)...go look it up bc is a fact, then you can buy gold with it. Check out Mike Mallony bc he has that service and are other places.., I buy kratom with it and always 10% discount, I bough a mobile battery pack with it and now I gonna buy the solars for it with Bitcoin, ....and yes I see Bitcoin not succeed but it can before that even reach 100-300k but yes Bitcoin will NOT be the world currency but for now you can pay a lot in it and this are ALL FACTS

BTC is not money and will never be used as money. BTC is just „an asset”.

If one is to say that BTC as „asset” can still reach USD 100-300k level.
I am saying that BTC is dead end in evolution of money(?), my advice is to get rid of cryptogarbage ASAP. Moreover, I suspect that such bright BTC prospects are simply motivated by a willingness to sell cryptocurrency. Social existence determines consciousness (st. Carl Marx)

Wikipedia has certain limitations. Yet we may find there „Cryptocurrency bubble” (https://en.wikipedia.org/wiki/Cryptocurrency_bubble). Fragments copied for readers' convenience:

Predictions of a collapse of a speculative bubble in cryptocurrencies have been made by numerous experts in economics and financial markets.
Bitcoin and other cryptocurrencies have been identified as speculative bubbles by several laureates of the Nobel Memorial Prize in Economic Sciences, central bankers, and investors.
From January to February 2018, the price of Bitcoin fell 65 percent. By September 2018, the MVIS CryptoCompare Digital Assets 10 Index had lost 80 percent of its value, making the decline of the cryptocurrency market, in percentage terms, greater than the bursting of the Dot-com bubble in 2002. In November 2018, the total market capitalization for Bitcoin fell below $100 billion for the first time since October 2017, and the price of Bitcoin fell below $4,000, representing an 80 percent decline from its peak the previous January. From 8 March to 12 March 2020, the price of Bitcoin fell by 30 percent from $8,901 to $6,206. By October 2020, Bitcoin was worth approximately $13,200.
In November of 2020, Bitcoin again surpassed its previous all time high of over $19,000. After another surge on 3 January 2021 with $34,792.47, Bitcoin crashed by 17 percent the next day. Bitcoin traded above $40,000 for the first time on 8 January 2021 and reached $50,000 on 16 February 2021.

Bitcoin has been characterized as a speculative bubble by eight winners of the Nobel Memorial Prize in Economic Sciences: Paul Krugman, Robert J. Shiller, Joseph Stiglitz, Richard Thaler, James Heckman, Thomas Sargent, Angus Deaton, and Oliver Hart; and by central bank officials including Alan Greenspan, Agustín Carstens, Vítor Constâncio, and Nout Wellink.
The investors Warren Buffett and George Soros have respectively characterized it as a "mirage" and a "bubble"; while the business executives Jack Ma and Jamie Dimon have called it a "bubble" and a "fraud", respectively. J.P. Morgan Chase CEO Jamie Dimon said later he regrets calling Bitcoin a fraud.

They say it openly. This is an asset bubble.


Let me explain the phenomenon of Bitcoin „value”. Now it is USD ~50k.
Bitcoin „wealth” distribution here: viewtopic.php?p=10462#p10462
Bitcoin „wealth” is enormously concentrated, 4% addresses control over 96% of BTC value. Remaining 96% addresses own 3,5% of BTC value.
Cryptocurrency exchanges are private businesses with no public supervision unlike stock exchanges. Most of crypto „trade” is complete fiction. This is transfer of BTC from left trousers pocket to right jacket pocket and vice versa. BTC turnover is fiction, BTC „value” is a PsyOp.
I wish good luck any person selling BTC. Luck will be needed, folks behind BTC bubble don't like to spend dollars for nothing.


Dianthus declares we can buy a lot with BTC. Can we? I don't care of Tesla, this is NWO device for xxxxxs. Where is this solar panels distributor quoting panels in BTC? Doesn't have any website? Where is this business selling mobile battery packs in exchange for BTC? No website? Is it a shame to quote stuff in BTC? They don't promote themselves because of unwillingness to expand sales?

Here Maloney talking about fall of US dollar as a global currency, eight years ago:


I don't want to say that will not happen. US dollar will certainly fall. United States will certainly fall. Plenty of currencies had fallen including Austrian Gulden, Reichsmark, Russian Rouble, Turkish Lira, Indonesian Rupiah, Iranian Rial, Swedish Krone, etc. But this guy is talking about dollar crisis for over a decade. Even broken (analog) clock shows right time twice a day.

Maloney does not want to help people. He wants to sell them something. He promotes certain narrative and wants to monetize human fear/greed/ignorance, etc.

Gold&silver coins are not money! Here plenty of coins made of solid metal: viewtopic.php?p=10393#p10393
All these coins had gone with state which used them as a currency. In Europe there are plenty of coins from 19th century, they were used as money by German, Austro-Hungarian or Russian Empire or French Republic or Spanish Kingdom. So what? They had gone with countries or monetary reforms. Money is just a legal construct (State Theory of Money).

People have no experience in copper, silver or gold coins. Any coin is simply a piece of metal with unknown composition and unknown value. Example, electrum coins from Greece: 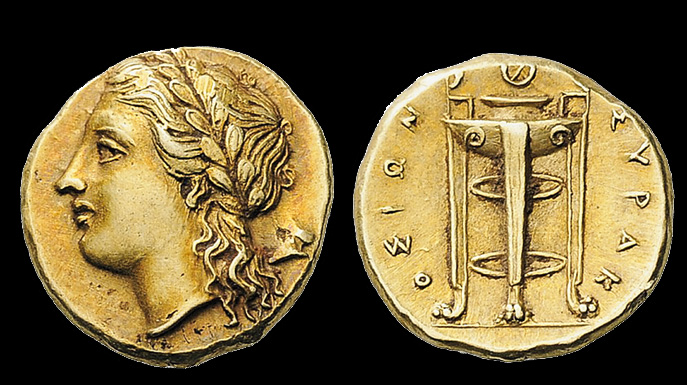 Electrum is gold-silver alloy. Difference between gold and silver value was 1:14. Who knows composition of particular coin? Mystery for a layman. These coins were used as money only because of stamp of a ruler. Counterfeiting this stamp was usually punished by death.
Political power certified value of every piece of metal. The same with coins from 19th or 20th century. Gold&silver coin is money as long as the stamp remains valid. After fall of the state or monetary reform any coin turns into piece of metal again. Liquidity of such piece of metal is limited, usually they are sold at discount.

Chinese gentlemen offer gold coins and bars made mainly of tungsten: http://gold-tungsten.com/tungsten-gold-coin.html
Tungsten is far cheaper than gold yet both metals have similar specific weight. Hard to find a difference without destruction of gold(?) bar or coin. Today stamp of a ruler on a piece of metal is even more necessary than centuries ago. Mike Maloney sells just pieces of metal, not money. The difference between them is validity of the stamp.


Katasonov repeats previously expressed opinion, BTC is US special services project. Says that USD 52k for a BTC does not have to be the max price, BTC „value” may still rise (4:03)!
Millions of lumpeninvestors will contribute towards profits of very few at the top of this Ponzi scheme. Cryptocurrencies may survive just few years as speculation instruments (5:35). They will certainly die because of the change of central banks' policy. Several years ago central banks tolerated cryptocurrencies. This policy is changing now, central banks plan to introduce their own digital currencies. For this reason BTC will be restricted.
Katasonov says that PBOC is working towards digital yuan. This money is already tested in four cities (7:00). Digital yuan will replace both cash and money created by the banking system. In February 2022 Olympic Games will take place in China. There are plans to introduce digital money at the Games. PBOC is so advanced that China may implement digital money in 2022.


Does anyone remember interview with Catherine Austin Fitts „Planet Lockdown”? Must see:


Fitts is talking about „magic virus” as a smoke covering transformation of the financial system in the US (worldwide) and replacement of traditional money with digital currency.

Does anyone see any market space for „cryptocurrencies”?
Top
Post Reply
33 posts