Onthefence wrote: ↑Tue Sep 14, 2021 6:26 am ok fuck it i cant keep reading through all this its depressing. I do remember reading something doesn't mean its true doesn't mean my memory is correct either., probably should have thought about that before i made the remark. Meh

just read this one though, Headline reads 'More polio cases now caused by vaccine than by wild virus' but the go onto explain they need to immunize more that 95% of the population. Sure that makes perfect sense????

All good, thanks for the links. I was just curious as I have encountered the use of the "success" of the polio vaccine as a pro-vaccine supporting stance for the Covid-19 "vaccine" products. I've had nothing to say on the subject, because from what I am told; A polio vaccine was produced and now polio is no longer a threat here in Australia. So I don't really know if it was a case of a modern medical success or just another media-driven lie...


Firestarter wrote: ↑Tue Sep 14, 2021 6:31 am I haven't seen that statistic.
If you're interesting in polio vaccines. It was the first "vaccine" topic that I investigated (many pictures of graphs taken down).

The polio virus doesn't cause paralysis, so obviously the polio vaccine won't prevent people from being crippled.

The oral polio vaccine pushed by Bill Gates actually causes paralysis, which is then labelled "non-polio acute flaccid paralysis (NPAFP)" so while the paralysis rates increase because of the vaccine, they still claim that the polio rates go down?!?

Yes, just quickly looking into it I came across very similar information. Use of the insecticide DDT being a likely cause of polio-like symptoms and/or diagnoses. Which makes perfect sense when you indiscriminately smother children with a nerve gas as the media had promoted ("DDT is good for me-e-e!") - No coincidence there would be ensuing nerve damage causing pain and muscular paralysis?

This page shows a short excerpt from the 2008 book "Fear of the Invisible" by Janine Roberts (died in 2016). It looks like the good Old Boys were up to the same tactics in the 1950s that we are seeing play out now...

Children inoculated with one brand of the vaccine, the Cutter, had developed poliomyelitis.

Within two weeks [after announcing the vaccine] nearly 200 vaccinated children had gone down with polio. This produced near panic in the White House. It was not yet summer. Polio normally did not strike at this time.

President Eisenhower had publicly endorsed this vaccine and did not want any failures on his watch. US Health Secretary Oveta Hobby thus went to see the Surgeon General to sternly say the president needed to be spared further embarrassment!

Within days, on 8 May 1955, the Surgeon General suspended the entire US production of the vaccine and called for emergency meetings with Salk and the manufacturers.

They then agreed that these cases were caused by polioviruses surviving the formaldehyde poisoning by being inside "lumps in the vaccine".

The manufacturers agreed to stir their vaccine better, the public were told they had no further need to worry, and the distribution of the vaccine resumed after only a five-day break.

Yes, "Lumpy vaccines" sounds plausible. Just give it a good shake before injecting and you should be all good...


Now we move into some more "modern tactics"...

In 1956, the health authorities instructed doctors that they were in future only to diagnose polio if a patient has paralytic symptoms for 60 days or more. As polio was diagnosed previously if there were just 24 hours of paralytic symptoms, and as the disease in milder cases frequently lasted less than 60 days, this automatically meant vastly fewer cases of polio would be reported.


And the bullshit detector is buzzing...

Furthermore, it was now decreed that all cases of polio occurring within 30 days of vaccination were to be recorded, not as possibly caused by the vaccine, but as "pre-existing". This regulatory change also ensured that far fewer cases of vaccine failure would be recorded.

Another regulatory change had an even greater impact. Most polio diagnoses during the epidemics had not involved paralysis but muscular weakness and widespread pain.

In many cases this was produced by inflammation of the membrane that protects the brain and spinal neuron cells. The CDC described such cases as "serious but rarely fatal".

Sounds a bit like our "novel" friend "SpikeVax" at play... But isn't Moderna developing NEW tech?

But doctors were now instructed that all such cases must no longer be diagnosed as polio but as viral or aseptic MENINGITIS.

Thus began the common diagnosis we now see as "Meningitis"...

But this reclassification of polio cases seemingly did not satisfy the regulatory authorities. Apparently there were still too many cases of the worst kind of polio, "paralytic polio" - so it was finally decided that these cases must also be removed from the polio case registry, thus eliminating nearly all the remaining cases of polio in the world - giving the vaccine a stunning and utterly fraudulent victory.

This was achieved by announcing that in future all patients with the classic polio paralytic symptoms were to be diagnosed initially as having "Acute Flaccid Paralysis (AFP)" and thus reported to the regulatory authorities.

BINGO! Polio was "eradicated" through reclassification... Vaccines for the Win!
Last edited by Aphotic on Tue Sep 14, 2021 8:57 am, edited 3 times in total.
Top

The Polio takeaway: Any way we look at this "miracle vaccine", it sounds all too similar to what we are seeing nearly 65 years later ...
Top

While I am hijacking the thread I might as well take the ball and just run with it... (Sorry admin! - Please feel free to split off into a new thread)

Aphotic wrote: ↑Tue Sep 14, 2021 9:20 amWhile I am hijacking the thread I might as well take the ball and just run with it... (Sorry admin! - Please feel free to split off into a new thread)

There is some interesting information posted here on polio vaccines...

In 1956, the health authorities instructed doctors that they were in future only to diagnose polio if a patient has paralytic symptoms for 60 days or more. As polio was diagnosed previously if there were just 24 hours of paralytic symptoms, and as the disease in milder cases frequently lasted less than 60 days, this automatically meant vastly fewer cases of polio would be reported.

Yes that's another important point. I suspect that they are planning a similar scheme in the COVID pandemic: changing the PCR tests to give (false) positives for the unvaccinated, while not getting positive (or at a much lower rate) when COVID vaxxed.

In 1942, the "polio epidemic" of the first half of the century subsided, and there were fewer than 5,000 cases of polio in the US. Around 1948, the number of polio cases began to soar. Polio reached a peak in 1949, with nearly 43,000 cases. By 1951 the number had dropped to below 28,000.
Following a government-subsidised study of polio vaccine, the number soared again to an all-time high of more than 55,000 cases. Most diagnoses were based upon clinical observation, not sophisticated virological studies and medical quack (doctors) were basically instructed to label any paralysis as polio.

After introduction of the polio vaccine, in 1956 the American Medical Association (AMA) instructed each licensed medical quack that they could no longer classify polio, as vaccines had eradicated polio, or their license to practice would be terminated.
Any paralysis would now to be diagnosed as AFP (acute flaccid paralysis) MS, MD, Bell's Palsy, cerebral palsy, ALS (Lou Gehrig's Disease), Guillian-Barre, etc. 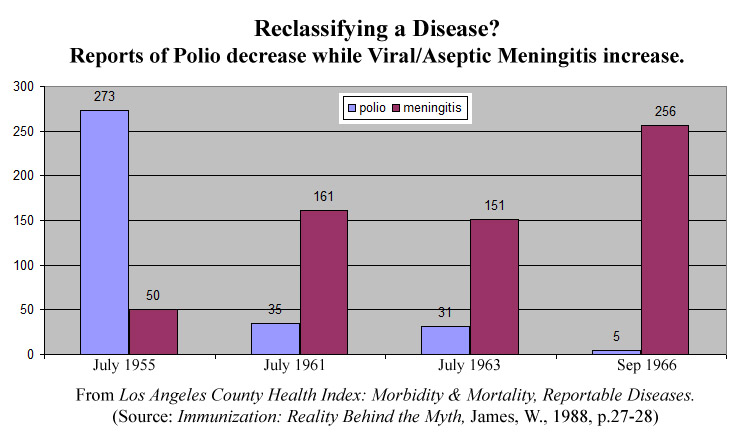 The monkey viruses in the polio vaccines is something I haven't really posted about because I couldn't find evidence that this has actually caused cancer...

I sometimes find it hard to set myself to reading overview stories on topics I've already investigated.
The Order of the Garter rules the world: https://www.lawfulpath.com/forum/viewto ... 5549#p5549
Top
Post Reply
15 posts