Why this history hidden...

Discussing topics relating to all aspects of the hidden history of humanity.
Post Reply
8 posts • Page 1 of 1

Why this history hidden...

I am trying to contact Max with this info bc I think is very important that people now of this and can also be so big that it can be THIS that is making it all crazy around us...

Can it be that the powers that be now that there is something natural coming soon and therefore all those crazy measures and medical tents and army everywhere?
Do not say that it is this be can explain some things....


David does an excellent job here to connect the dots with history and The Electric Universe if you ask me. The short one is this:7

I got some new info but from a different angle. Watch the series of Andrew Hall. This is good short one of him:
ThunderboltsProject
Andrew Hall: Handbag of the Gods | Space News

but he has over 10vids, I believe in the last months, on the ThunderboltsProject...

Also Adapt is going around the internet bc people want and need to now this. To make it clear it is NOT an extinction event or so but the past Electric Storms where really big. You can see that on the vids of Andrew Hall. We do not see it so big this time bc the Solar system is more evolved and nature is not here to kill us, just like the germ theory is just a theory and a wrong one but that is another story.

Interesting information on hidden history, thank you so much for sharing this!

So many archaeological sites with great importance for human history seem to have its origin from ancient places in Turkey just as Gobekli Tepeis.
https://www.smithsonianmag.com/history/ ... -83613665/
Regarding the covering up of history by submerging ancient cities - they did it again

History seems to always repeat itself - last year Hasankeyf, an ancient city in Turkey that housed a large number of different civilizations over 12,000 years, was submerged because of the Turkish government's dam project that was launched back in 2006. Hence they completely wiped out a large part of history. 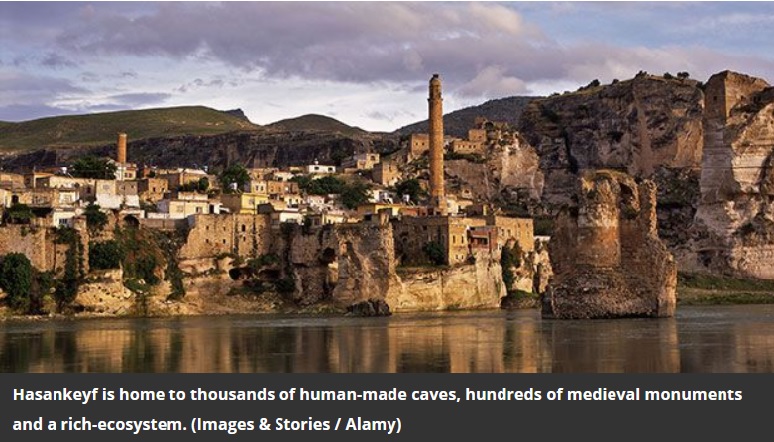 
"The waters of the Tigris River gave rise to the first settlements of the Fertile Crescent in Anatolia and Mesopotamia—the cradle of civilization. The ancient city of Hasankeyf, built on and around the banks of the river in southeastern Turkey, may be one of the oldest continuously inhabited settlements in the world, spanning some 10,000 years. Hasankeyf and its surrounding limestone cliffs are home to thousands of human-made caves, 300 medieval monuments and a unique canyon ecosystem—all combining to create a beguiling open-air museum.

But the city, along with the archaeological artifacts still buried beneath it, is slated to become a sunken treasure. Despite widespread protests from local authorities, archaeologists, architects, preservationists and environmental groups, the massive hydroelectric Ilisu Dam is expected to be completed in 2013. The reservoir created by the dam will inundate the site's caves and flood most of its structures.

More than 20 cultures have left their mark at Hasankeyf. The first settlers probably lived along the Tigris in caves carved into the rock cliffs. (The ancient Assyrian name for the place was Castrum Kefa, meaning "castle of the rock.") The Romans built a fortress there circa A.D. 300 to patrol their empire's eastern border with Persia and monitor the transport of crops and livestock. In the fifth century A.D., the city became the Byzantine bishopric of Cephe; it was conquered in A.D. 640 by the Arabs, who called it Hisn Kayfa, or "rock fortress." Hasankeyf would next be successively ruled by the Turkish Artukid dynasty, the Ayyubids (a clan of Kurdish chieftains) and the Mongols, who conquered the region in 1260.

Hasankeyf emerged as an important commercial center along the Silk Road during the early Middle Ages. Marco Polo likely passed over its once-majestic stone, brick and wooden bridge, built around 1116 (only two massive stone piers and one arch remain). In 1515, the city was absorbed into the Ottoman Empire and has since remained a part of modern Turkey.

Among the site's most important structures are the ruins of the 12th-century palace of the Artukid kings; the El Rizk Mosque, built in 1409 by the Ayyubid sultan Suleiman; and the 15th-century cylindrical Tomb of Zeynel Bey (the eldest son of Uzun Hasan, who ruled over the region for 25 years). The tomb is decorated with glazed blue and turquoise bricks in geometric patterns that suggest a significant artistic link between Central Asia and Anatolia.

"About 200 different sites will be affected by the Ilisu Dam," says Zeynep Ahunbay, a professor of architectural history at Istanbul Technical University. "But Hasankeyf is the most visible and representative of all, due to its picturesque location and rich architectural content. It is one of the best-preserved medieval sites in Turkey."

The consortium of German, Swiss, Austrian and Turkish contractors charged with erecting the Ilisu Dam has already begun constructing a bridge and service roads for the transportation of building materials. The 453-foot-high dam will hold back the waters of the Tigris just before it flows into Syria and Iraq, creating a massive 121-square-mile reservoir that will raise the water level in Hasankeyf more than 200 feet. The consortium and the Turkish government maintain that the dam will provide power and irrigation to the area, encourage local development and create jobs. And, they say, the reservoir will be a magnet for tourists and water sports.

Opponents counter that most of the electricity generated by the dam will go to the big industrial centers in the west of the country. They advocate developing alternative energy sources instead, such as wind and solar power, and promoting cultural and environmental tourism.

"The dam will bring only destruction for us," says Ercan Ayboga, a hydrologist at Bauhaus University in Germany and spokeman for the Initiative to Keep Hasankeyf Alive, which was formed in January 2006. "There will be no benefit for the people of the region." The project will displace tens of thousands of residents and threaten hundreds of species, including the rare striped hyena and the Euphrates soft-shelled turtle. Moreover, Ayboga says, "We will lose cultural heritage on the highest level, not just local heritage, but world heritage."

In late 2008, the European members of the Ilisu Dam consortium put a six-month freeze on financing because the project failed to meet World Bank standards for environmental and cultural protection—thereby temporarily halting construction. For its part, the Turkish government has proposed moving 12 of Hasankeyf's 300 monuments to a newly created cultural park about a mile north of the city. But the plan has not mollified protesters. "It is totally impractical and technically impossible," says Ayboga. Many of the monuments are made from ashlar masonry, he notes, which are uniform stone blocks carefully sculpted to fit together; they cannot simply be taken apart and reassembled. The monuments would lose some of their original details as some blocks break and crumble, and recreating the proper alignment is difficult. "And the dramatic siting, the rock caves, the aspect of the river, all will be lost."

Professor Ahunbay agrees: "It is impossible to transfer and 'save' Hasankeyf at the same time. Many of the features of the old city were brought to light by excavation, yet there is still more to be revealed. One-third of the visible traces are still covered by rubble and earth."

Ahunbay takes the long view. "When the very short useful life of the dam is set against the long history of Hasankeyf and its potential to live for eternity," she says, "one without doubt must chose the survival of Hasankeyf."

Yeah the world is going to change big time in the coming years. I do expect it not so worse like 2000-8000jaar ago, if we follow Thunderbolts EU, bc back then there where a lot of cave paintings made of that phenomenon and it is not water alone people that has made this world...

We are living in great times and do not fear it bc this has nothing to do with an extinction event bc that is not how nature works. There is a connection between Mother Earth and We but She needs some help from us but we are also a sleep bc the Cabal is destroying a lot with chemtrails, HAARPs, weather manipulation and overall pollution. And then we get this weather. They did not let it rain in Spain for tourism and not they are paying the price...
Top

Thunderbolts of the Gods - Electric Universe

"Enlightenment is a destructive process"
Top

He is the maker of the Eye of the Storm series that gives proof of the past Thunderbolts (Storms) on this planet...