This section covers all topics relating to Covid, Lockdown and the new normal.
Post Reply
15 posts

The searchable adverse events database for the Australian Therapeutic Goods Administration (TGA), called the DAEN, has previously gone offline due to high traffic / search queries and could potentially be taken offline at any time by the Australian government.

Presently, the PDF export / print feature is offline, only allowing access to download the "Weekly Reports", which are filtered / doctored as required. 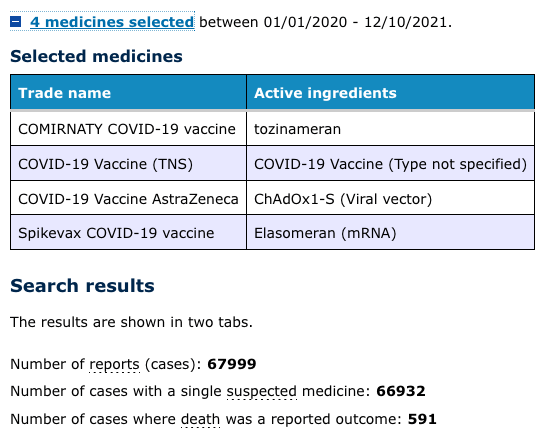 I spent some time today creating full height screenshots and pushing them through a PDF render workflow to archive and easily print out these rendered tables.

Sorted by: "Number of cases where death was a reported outcome - highest first"
Use these official reports as grounds for exemption with your trusted doctor. Any prior adverse events caused by other "vaccine" or medical products or susceptibility to any of these reactions (including allergy / anaphylaxis) will be your valid reason for exemption. Your doctor must take accountability, to consider these real, officially reported, adverse events in regard to your personal health and wellbeing and address your concerns. If they don't want to address officially reported reactions, find another doctor.

I hope this can help somebody out there looking to keep their employment, or whatever else is at stake. 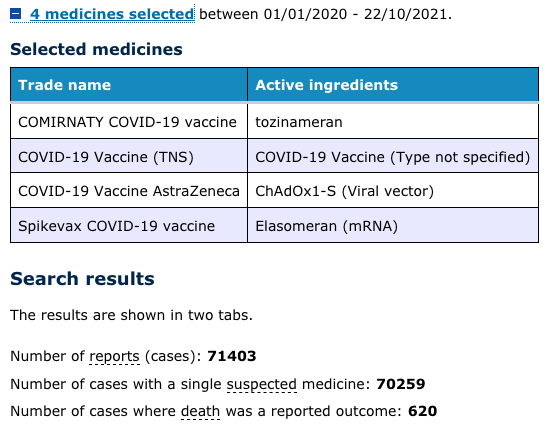 In 10 days since the last report (above) we see 3,404 new adverse event cases and another 29 deaths across Australia.
Top 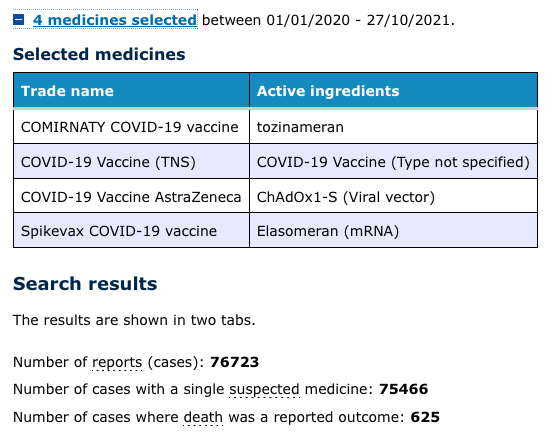 In just 5 days (since the last screenshot), there is an increase of 5,320 adverse event reports, and 5 more deaths.
Top 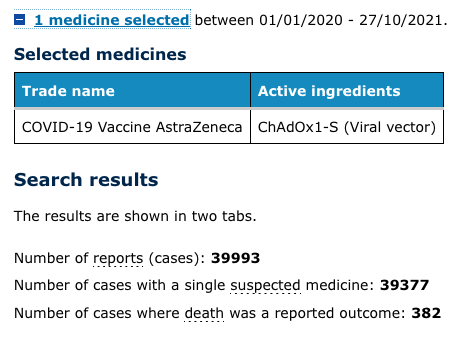 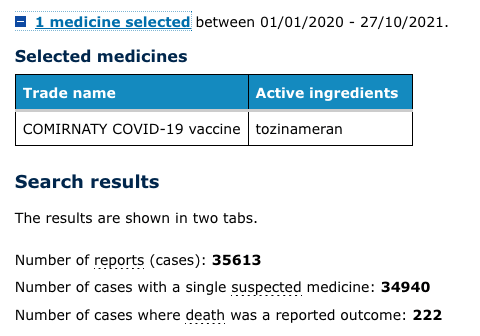 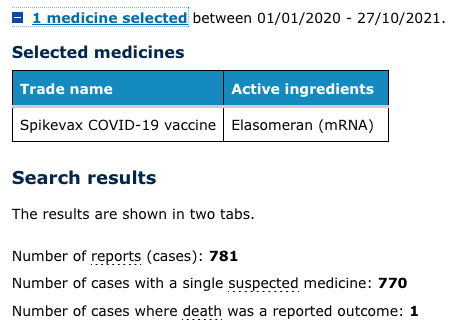 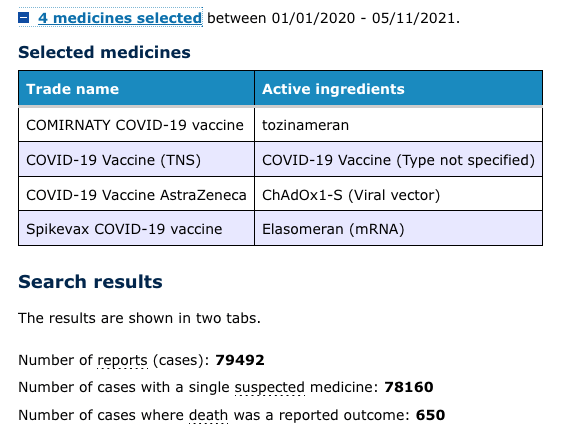 3 days since the last report, showing an increase of 1,196 adverse event reports, and 8 more deaths across Australia.

When we break the numbers down like this it shows that the chances of death from taking any dose of the jab is going to be approximately 1 person in every 55,000 doses. When you consider each person is required to take 3 doses (so far), this group size gets divided by three and presents as 1 person in each group of 18,333 people will die from the jab.

The more boosters are pushed, the higher the risk per person. It has been reported that each additional jab impacts the body more adversely than the last. This is logical considering the design behind the mRNA production of spike proteins attacking the body from within.

Some reports state the VAERS reporting system could account for only 1% of all adverse events. So, even if we were conservative about this and said it was closer to 20%, then multiply the chance of death from the jab by a factor of 5, which would result in a probability of 1 in every 3,666 people (receiving 3 jabs) to die, but I am skeptical about this.

We know that these reporting systems are not a catch-all, however despite these assumption, the numbers across these two separate reporting systems are quite similar, which puts some doubt into the idea that reports are being missed (or deleted) on a large scale, unless missed uniformly across both platform. I'm not saying this is not possible though, as the same tyrannical governing bodies have the power to control the information.

Reading a little into this analysis, I would suspect VAERS reports of a (more mild) adverse event are less likely to be recorded than what we see on the TGA DAEN. Whereas deaths are assumed to be reported more routinely on both systems. From what I have heard from videos online, a VAERS report can take some time (upwards of 30 minutes) as a unique case summary is also included with each report. Whereas the TGA DAEN is assumed to be simpler to submit as only basic patient details (age, gender, etc) and a selection of organ class and symptoms are recorded. The TGA DAEN does not appear to include an individual case summary, but perhaps this is just not made public like VAERS.

I am not advising anyone take part in this trial "vaccine" product in any way, but reading into this data a bit further has given me a little bit of relief when considering family and friends who have already opted in. The danger of initial death from the shots appears to be quite rare (1 in tens of thousands), but still far from acceptable to consider these products "safe".

The hope I am holding is that our friends and family who took part in this trial, will not find themselves in a complete state of ill health from simply taking the initial few jabs. However, the long term affects still remain publicly unknown — I am positive the manufacturers know of their intended outcome.

As the "vaccine" products produce negative efficacy for stopping the spread of the virus (due to an impacted immune system), it becomes clear the psychological, cognitive and hypnotic effects of these products appear to be far more intended than any potential "side effect" ailments or death by jab — eliminating the "kill shot" theory.

The best thing we can do now is to simply observe. Continue to study this as a trial as subjects develop further symptoms, neurological and/or emotional disorders, impacted cognition, and more entrenched hive-minded thought patterns. Or adversely (with some kind of divine intervention), they will become stronger, healthier and turn the whole thing around. Maybe booster shot #6 will be the winner!

Cynicism aside, I am hopeful there is an antidote for the spike protein factory mRNA damage inflicted by these products. If DNA can be altered through mRNA technology, then potentionally, what was switched on could in turn be switched off again.
Top 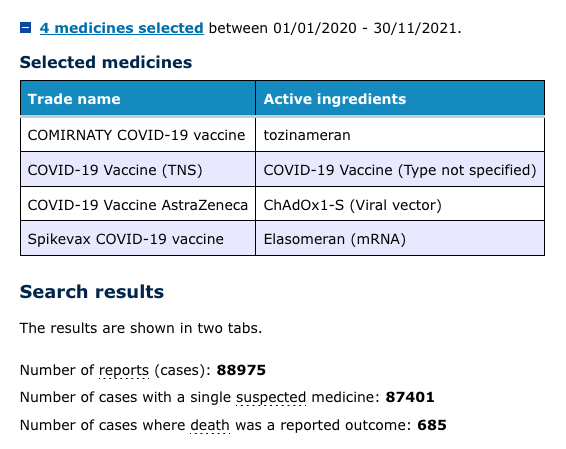 This lying scum website it distorting the truth. You’ve got to scroll down below the search results to the table, then:

1. Sort the data “number of cases where death was a recorded outcome” to highest.
2. Scroll to the bottom of the table and change the display from 50 to 500 so you can then:
3. Copy and paste the entire table to excel so you can sum the column (the column furthest right for deaths).

It’s will show that 1656 Australia’s have been killed by this shit and not 685 in the search results. I should also note the adverse reactions exceed more than 250,000.
Top

Great tip. Thank you for sharing.

Yes, it really is impossible to depend on these people for accurate data when they are same people giving approvals for these pharma products, where big money will exchange hands to present a story to the public which best suits their agenda.

I would not be surprised to learn this database is completely fabricated and just another actor on the stage.

My intent here is to simply track the product “progress” according to the “authority” as a means for others to share with their family and friends who have been told by the same authority that these products are safe and effective, when they are neither.

Whether 1,656 or 685 deaths from these products, any number greater than zero SHOULD be enough to slap people awake. You would think...

This is sickness as a religion. Believe! Trust in the science! Obey!
Top

Good afternoon, Satan is the great deceiver. His tools of confusion, lying, are his best traits. We must be spiritually strong in this dark day. We are at war. The Jabbed vs the purebloods. There will be perilous times ahead. This agenda will go full speed to get any defiant souls on board. Remember, Satan wants every soul. you are not exempt.
Top
Post Reply
15 posts