This section covers all topics relating to Covid, Lockdown and the new normal.
Post Reply
65 posts

In June our beloved King Willem-Alexander visited The Hague (Marktweg) for some sort of celebration for the Dutch soccer team, he blatantly showed that the coronalockdown, that he's imposed on all of us, doesn't apply to himself.


The royals must be desperate for some publicity, trying to convince us of their non-existent popularity, as they always find it difficult to hide their contempt for the masses.
They are now spinning the tale that we really can't hold this against our ruthless dictator, as he's just a "normal" guy.

See Willem-Alexander shaking the hand of one of the few who doesn't hate his guts. (in Dutch) https://www.rtlnieuws.nl/nieuws/politie ... ten-houden
The Order of the Garter rules the world: https://www.lawfulpath.com/forum/viewto ... 5549#p5549
Top

Dutch politician Baudet of the FvD party has been publicly shamed (and fined?) for violating some of the COVID lockdown measures. Here's Thierry Baudet with a rant on the 2010 Rockefeller Lock step plan in Dutch parliament (the English subtitles version of this video was deleted by Youtube).
Thierry Baudet over de Rockefeller foundation & TOTALE macht en controle (in Dutch)

With the plandemic based on lies, the truth is oh so dangerous.

So, several banks and payment services in the Kingdom of the Netherlands, including the ING bank, Triodos bank (of the royal-affiliated Brenninkmeijer family), bunq bank and payment service Mollie, have been illegally blocking accounts of antivaxxer/anti-lockdown organisations.

The same Rabobank that in 2015 was involved in a failed ploy to murder me by illegally blocking my bank accounts, goes furthest in these practices against freedom of speech (in Dutch): https://www.nu.nl/economie/6151899/bank ... axers.html
The Order of the Garter rules the world: https://www.lawfulpath.com/forum/viewto ... 5549#p5549
Top


This doesn't surprise me one bit as Prince Bernhard Jr, cousin of King Willem-Alexander, is a major shareholder in the Zandvoort circuit.
Bernhard Jr also owns the Mediapark in Hilversum, where state propaganda for Dutch TV is made (in Dutch): http://archive.is/y6hH3


In November 2017, it was first reported that Prince Bernhard Jr. owns 590 “addresses”; 349 of which in Amsterdam. These addresses are houses, apartments, shopping centres and office buildings.
This earned him the nickname “pandjesprins”...

If I understand correctly most (or all) of this real estate is owned through Pinnacle BV that is owned by Bernhard Jr. and his business partners that also owns the Zandvoort circuit. I haven’t found out how much of it is personally owned by Bernhard Jr or who his business partners are (in Dutch): https://www.amweb.nl/financiele-plannin ... -101106596


Of course we can’t expect our wonderful media to estimate the worth of these 590 “addresses” and the circuit in Zandvoort and Mediapark. I think it’s safe to estimate the net worth of the 590 addresses alone at more than 400 million Euros...
The widow of Prince Friso, Mabel, who has been working for George Soros for decades, is also worth hundreds of millions.

In 2009, Forbes magazine estimated then Queen Beatrix’s (mother of Willem-Alexander) wealth at a low $200 million.

Just 10 years earlier, in 1999, Forbes estimated Queen Beatrix’s worth at £25 billion.
Noting that that a reliable calculation had been made impossible by the Dutch secrecy: https://www.theguardian.com/uk/1999/jun ... rchy.world


In 2019, Prince Berhard posters like this were seen in Amsterdam... That's interesting, when the circuit in Zandvoort was constructed, building activities in 1947 were stopped by the central government for violation of the rules. Then Prince Bernhard Sr. (grandfather of Bernhard Jr.) made a secret deal with the Zandvoort city council that for 20,000 guilders to his foundation he would stop the blockade.
Zandvoort simply increased prices for the first race on the circuit in 1948 to pay Bernhard Sr. Today, more than ten thousand peaceful protesters against the COVID police state in the centre of Amsterdam.
The protest was actually allowed, so nobody was harassed by the cops (in Dutch): https://www.nhnieuws.nl/nieuws/291263/g ... r-te-komen

The start of the protest march from De Dam...

Not surprising the (demissionary?) cabinet of the fascist Kingdom of the Netherlands in 2 weeks will make the digital vaccination passport mandatory for any social establishment (restaurants, bars, museums ...) for anybody over 13.

Our wonderful media seem to ignore that this is a blatant violation of our privacy, as this effectively makes the smartphones surveillance equipment mandatory (in Dutch): https://www.nu.nl/coronavirus/6156362/c ... wijnt.html
The Order of the Garter rules the world: https://www.lawfulpath.com/forum/viewto ... 5549#p5549
Top

It isn't quite clear what BS they are making up to distract/entertain the masses, the Dutch cabinet is already demissionary since January 2021 over a scandal with the Dutch tax services, with King Willem-Alexander ruling by decree and waiting to assemble his new propaganda team (cabinet) to expand the COVID police state even further and keep the migrant flood going...

Now Willem-Alexander has dismissed another cabinet member, Secretary of State at the department of economics Mona Keijzer, who dared criticise the vaccination passport, saying that it can't be "explained" (in Dutch): https://www.nu.nl/coronavirus/6159013/r ... napas.html
The Order of the Garter rules the world: https://www.lawfulpath.com/forum/viewto ... 5549#p5549
Top

Over here in the Kingdom of the Netherlands, all the "non-essential" shops, bars, restaurants and organised sports have to be closed by 17:00.
Nobody thinks it's strange that the coffeeshops (where they sell soft drugs) and liquor shops are among the "essential" shops, like supermarkets, that can remain open until 20:00.

Of course when shops close earlier, people have less time to do their shopping, with the result that it will be busier in the shops, which would increase the chances of a corona infection, but please don't think for yourself...

In the Dutch political freakshow, the parliament was really, really making a point that they are really against the privacy violating vaccination passports. So both houses of parliament (tweede and eerste kamer) have already voted for mandatory vaccination passports for "non-essential" shops.
This can be implemented whenever our beloved king thinks it's a good idea...

There are also bills to be voted on by our wonderful MP's to mandate vaccination passports for work and in schools.

It is of course completely preposterous to assume that violating our privacy would stop the spread of an infectious disease. That's besides that we were promised that the not-properly tested COVID vaccines with the 95% efficacy would stop the pandemic lockdown...
(in Dutch) https://www.nu.nl/politiek/6170642/ook- ... ppers.html
The Order of the Garter rules the world: https://www.lawfulpath.com/forum/viewto ... 5549#p5549
Top

On Saturday, there were thousands of protesters in several countries (cities) in Europe. Protesting against the lockdown, censorship, mandatory vaccination and vaccination passport. Most of them walking around with the surveillance equipment called mobile phones that have made this plandemic possible...

Here's a bunch of them in Utrecht in the Netherlands 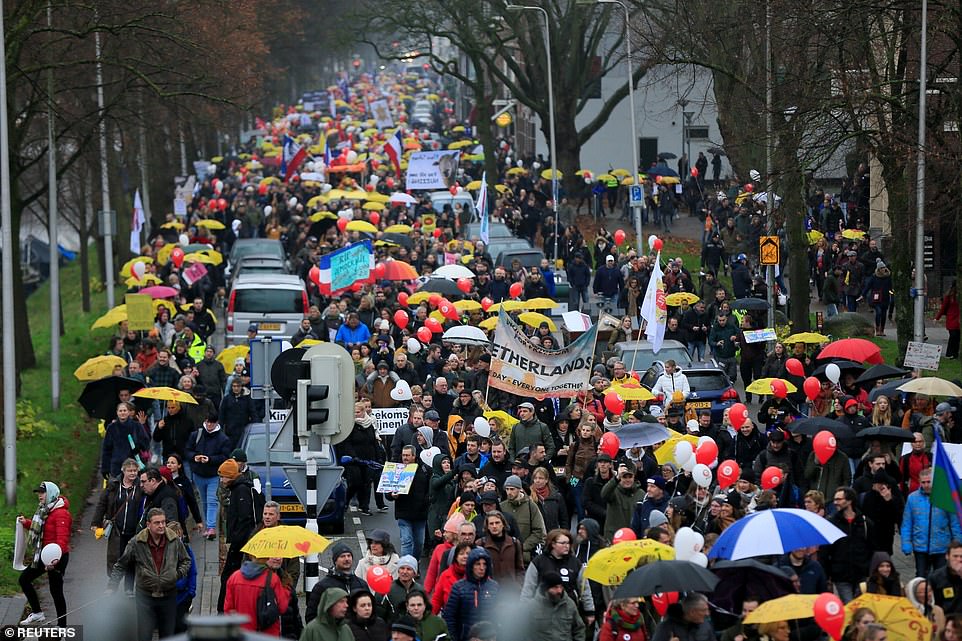